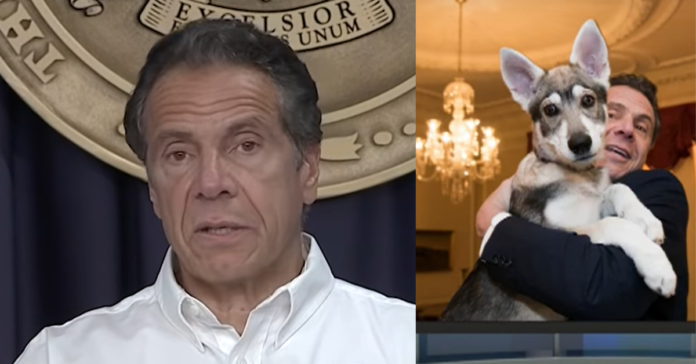 Gov. Andrew M. Cuomo is showing his true colors now that the disgraced politician will soon leave office. Cuomo has been staying with one of his sisters in Westchester County as the hours tick away on his term.

According to The Times Union, Cuomo is trying to dump the dog he got a few years ago for what appears, if the story is correct, a photo op. The story claims Cuomo recently asked staff members if anyone would like to keep his dog, Captain, who has remained at the mansion after the governor moved out last week.

Two State Police sources told the Times Union Cuomo has been asking staff if anyone wants to keep his dog Captain and one took him up on it only to return the dog.

Richard Azzopardi, a spokesman for Cuomo, denied the story ripping the media in the process before admitting that Cuomo did indeed ask someone to look after the dog but the arrangement was only “temporary” because Cuomo is going on vacation after he officially leaves office tonight at 11:59 p.m.

“Captain is part of the governor’s family and for your nameless ill-informed source to imply they’ve been trying to give him away is untrue,” Azzopardi said.

“Someone offered to watch him for a few days while the transition was ongoing but for that to be weaponized and morph from a game of telephone into the pages of your paper is absurd — now excuse us we’re preparing for a major storm,” he added.

“He wants to go on vacation.

“They love that dog.

“That’s not what he asked: He didn’t ask to give away the dog. This nameless source is crazy.

The Times Union stands by their story:

But a State Police source said they were told “he tried giving the dog to the (a mansion employee). … Apparently (the employee) took the dog home and it didn’t work — the dog walks him, he don’t walk the dog.”

The source, in an interview on Saturday, also said the dog had nipped at “several State Police members” as well as staff members, “and the governor would just laugh. … The dog remains at the mansion.”

Cuomo first introduced the dog, then 14 weeks old, in 2018 to a delegation from the state Conference of Mayors when they visited the Executive Mansion.

Cuomo, who struggled to control the dog during that public introduction, said his daughters had suggested getting the dog but were “nowhere to be found now.”

“He will only urinate indoors,” Cuomo said three years ago. “He has some kind of climate sensitivity that overpowers his bowel movements.”

Gov. Cuomo has recently asked staff members if anyone would like to keep his dog, Captain, who has remained behind at the Executive Mansion.

The governor's office says the arrangement was only "temporary." https://t.co/X6vLrA1KJK