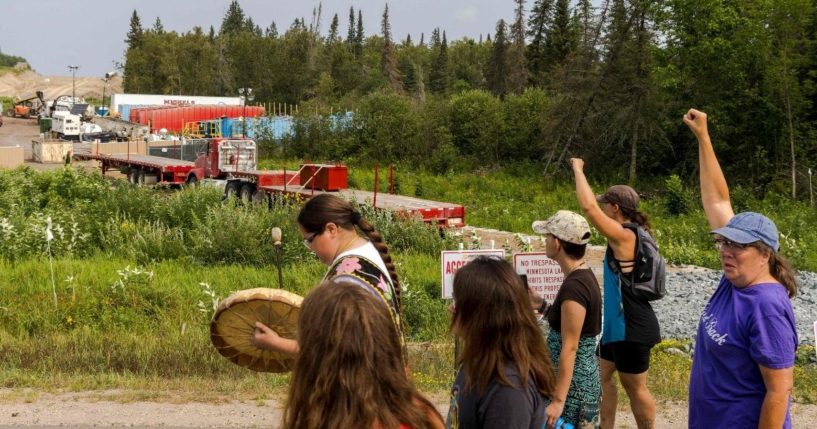 President Joe Biden canceled the controversial Keystone XL Pipeline on day one of his administration, but the move has proven to be completely political.

In Minnesota, environmentalists have been protesting the construction of the Line 3 oil sands pipeline, with the efforts being led by several local indigenous tribes.

As a result, over 600 people have been arrested or received citations during the protests, The Guardian reported.

So why hasn’t the Biden administration blocked construction of the pipeline yet?

Even though the project was approved under former President Donald Trump, the current White House has supported pipeline construction, saying that the pipeline posed no notable environmental threat.

But there is also another underlying reason — public relations.

The Line 3 pipeline has yet to become a household name, like Keystone was, so it is easy for the White House to avoid scrutiny on something not gaining national attention.

Biden and his appointees are likely also trying to avoid more negative media coverage following his termination of Keystone, and stopping all other federal oil and gas leases.

Over a thousand union workers were laid off instantly following Biden’s decision to appease left-wing environmental interests, and an estimated 11,000 future job opportunities were nixed, even though union workers put Biden in the White House.

The administration is starting to develop a wishy-washy reputation on energy, which will ultimately come back to bite its officials in 2022 and 2024.

“President Biden has made clear that he wants Americans to have access to affordable and reliable energy, including at the pump,” Sullivan said. “Although we are not a party to OPEC, the United States will always speak to international partners regarding issues of significance that affect our national economic and security affairs, in public and private.”

That’s right, the Biden administration has to beg the Middle East for oil after nuking the United States’ energy independence.

The pushback at the construction site of the Line 3 pipeline is evidence that the White House is reaping what it’s sowed, and members of the Biden administration are making themselves look like hypocritical fools.

Energy independence is essential for the United States to remain the most powerful country in the world — Biden’s flip-flopping on policy is crippling that necessity.

Canceling Keystone and keeping Line 3 alive and well is a de facto admission from Biden that it was all about politics. What else could it be?