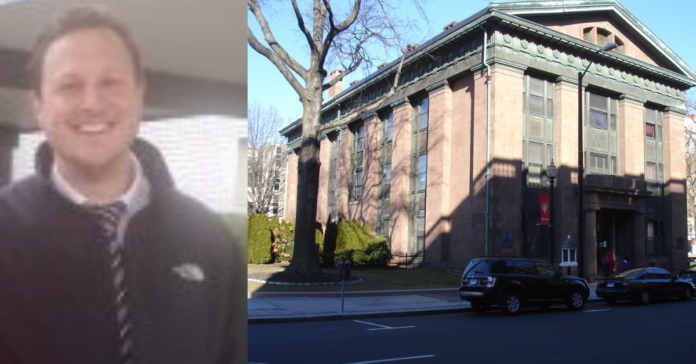 Bridgeport Dem Councilman Michael DeFilippo has been indicted by a federal grand jury on multiple election fraud charges in a bad sign for the Dems. DeFilippo, 35, represents Bridgeport’s 133rd District and has been a city councilman since 2018. He is accused of conspiring to “interfere with and obstruct Bridgeport citizens’ right to vote by falsifying his tenants’ voter registration applications and absentee ballots applications, then stealing tenants’ absentee ballots and forging their signatures in order to fraudulently vote for him,” according to the U.S. Attorney.

DOJ issued a press release that said: “Leonard C Boyle, Acting United States Attorney for the District of Connecticut, and David Sundberg, Special Agent in Charge of the New Haven Division of the Federal Bureau of Investigation, today announced that a federal grand jury in Hartford returned an indictment yesterday charging Bridgeport City Council member MICHAEL DEFILIPPO, 35, with multiple election crimes related to DeFilippo’s run for City Council in 2017 and 2018.

DeFilippo appeared today before U.S. Magistrate Judge Robert M. Spector in New Haven, entered a plea of not guilty to the charges, and was released on bond in the amount of $250,000.

As alleged in the indictment, DeFilippo, of Bridgeport, has been a member of the Bridgeport City Council since 2018, representing the 133rd District, and owns several rental properties in Bridgeport that he leases to students at Sacred Heart University.

Although Bridgeport’s City Council elections are held in odd-numbered years, because of repeated absentee ballot irregularities in the Democratic primary for the 133rd District, the September 2017 primary was re-run in November 2017, then re-run again in April 2018, and the general election took place in June 2018.

In 2017 and 2018, in connection with the 133rd District’s primaries and general election for City Council, DeFilippo and others conspired to interfere with and obstruct Bridgeport citizens’ right to vote by falsifying his tenants’ voter registration applications and absentee ballots applications, then stealing tenants’ absentee ballots and forging their signatures in order to fraudulently vote for DeFilippo.

“The right to vote and have one’s vote counted in a fair and impartial election is the foundation of our democracy,” said Acting U.S. Attorney Boyle.  “It is alleged that this defendant violated that right to help himself win election to the Bridgeport City Council, including by stealing ballots and forging signatures.

The U.S. Attorney’s Office and our FBI partners will continue to vigorously enforce federal laws to safeguard our elections.”

“Combatting public corruption in all forms continues to be a priority of the FBI,” said FBI Special Agent in Charge Sundberg.  “Our mission to protect and serve will always include ensuring our public officials are held to the same standards as every member of our communities.”

DeFilippo is charged with one count of conspiracy against rights, four counts of identity theft, and 11 counts of fraudulent registration.

Acting U.S. Attorney Boyle stressed that an indictment is not evidence of guilt.  Charges are only allegations, and each defendant is presumed innocent unless and until proven guilty beyond a reasonable doubt.

This case is being investigated by the Federal Bureau of Investigation and prosecuted by Assistant U.S. Attorneys Jonathan N. Francis and David E. Novick.