Donald Trump Sends Message To USA: “Do you miss me yet? 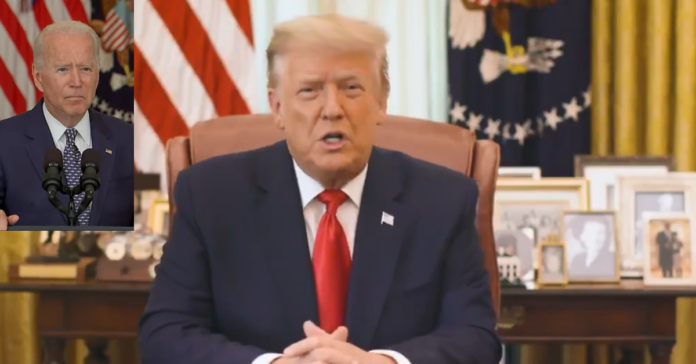 Former President Donald Trump sent a message to America detailing the differences between his administration and Joe Biden’s asking ‘do you miss me yet?’

Trump dropped the hammer saying: “Tragic mess in Afghanistan, a completely open and broken Border, Crime at record levels, oil prices through the roof, inflation rising, and taken advantage of by the entire world—DO YOU MISS ME YET?”

Fox News’ Bill Melugin said, “212,672 migrants were encountered at our Southern border during the month of July, a 13% increase over June (188,829) which was a 20-year record in itself. The numbers have gone up every single month President Biden has been in office. July is new 20-year record.”

“Having lived in some of the poorest parts of South Carolina, I can tell you first-hand that the one thing no one living in the communities where I grew up is asking for is defunding the police.”

It looks like Trump will run in 2024. From The Washington Examiner:

And now, his former press secretary and adviser, Sean Spicer, is just saying it.

“He’s in,” he said during a preview interview of his upcoming book, Radical Nation: Joe Biden and Kamala Harris’s Dangerous Plan for America, already an Amazon pre-sale bestseller.

Spicer said that the last few months of bumbles by the Biden White House, especially on Trump issues such as immigration, have encouraged the former president to look beyond the 2022 midterm elections during which he plans to be a “kingmaker.”

McLaughlin has suggested that 2024 could look like 1980, when Ronald Reagan, who lost his 1976 primary fight, beat a floundering Jimmy Carter. Should he run and win, McLaughlin predicted a Trump 2.0 would be “better, smarter.”

Having lived in some of the poorest parts of South Carolina, I can tell you first-hand that the one thing no one living in the communities where I grew up is asking for is defunding the police. pic.twitter.com/RJ1eUrYzRm