Elise Stefanik Calls For ‘Radical Authoritarian Speaker’ Nancy Pelosi To Be Fired: ”It is time to Fire Pelosi once and for all” 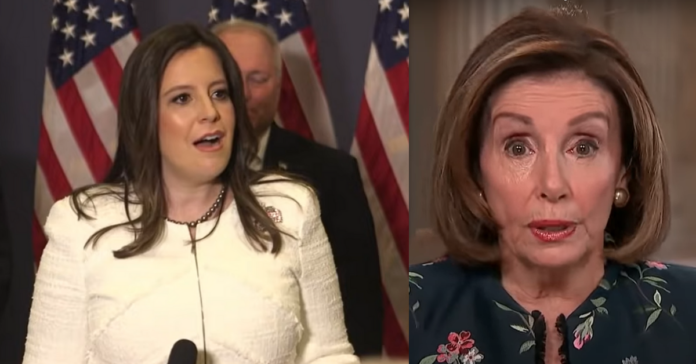 Elise said: ”Nancy Pelosi is a radical authoritarian Speaker. The Pelosi partisan January 6 commission was never about investigating the facts, it was only ever about Pelosi’s radical politics and the Left’s endless obsession with crushing any discussion or debate. What is Nancy Pelosi so afraid of?

“She is afraid of the American people finding out the truth that her failed leadership and the gross mismanagement of the U.S. Capitol led to the tragic events that day. It is time to Fire Pelosi once and for all. I have no doubt that after the next November, Nancy Pelosi will never, ever hold the Speaker’s gavel again. She will make history as the most despised Speaker of the House who will be fired not once, but twice. And it can’t come soon enough.”

“Speaker Nancy Pelosi has taken the unprecedented step of denying the minority party’s picks for the Select Committee on January 6. This represents an egregious abuse of power and will irreparably damage this institution. Denying the voices of members who have served in the military and law enforcement, as well as leaders of standing committees, has made it undeniable that this panel has lost all legitimacy and credibility and shows the Speaker is more interested in playing politics than seeking the truth.

“Unless Speaker Pelosi reverses course and seats all five Republican nominees, Republicans will not be party to their sham process and will instead pursue our own investigation of the facts.”

Pelosi tried to justify her actions in a press release that said: “The violent domestic attack on Congress on January 6th was the worst assault on the Capitol since the War of 1812 and the worst domestic assault on American Democracy since the Civil War.  We are facing a radically new threat in the kinds of forces that combined to attack our government on January 6th.  The future of our democracy is on the line.  This assault was an attempt to overthrow the government.

“We need a comprehensive investigation as to who organized this attack, who paid for it, how they nearly succeeded in overthrowing a presidential election, why they did it and how we must organize ourselves to prevent anything like it from ever happening again.

“It had been our hope to establish a bipartisan, independent National Commission, but there is no prospect for that Commission at this time because of insufficient support from Republican Senators.  Therefore, the House established the Select Committee to Investigate the January 6th Attack on the U.S. Capitol.

The Select Committee on the January 6th Insurrection will investigate and report upon the facts and causes of the terrorist mob attack on the United States Capitol on January 6, 2021.

It will also be charged with reporting its findings, conclusions and recommendations for preventing future attacks.

“Monday evening, the Minority Leader recommended 5 Members to serve on the Select Committee.

I have spoken with him this morning about the objections raised about Representatives Jim Banks and Jim Jordan and the impact their appointments may have on the integrity of the investigation.

I also informed him that I was prepared to appoint Representatives Rodney Davis, Kelly Armstrong and Troy Nehls, and requested that he recommend two other Members.

“With respect for the integrity of the investigation, with an insistence on the truth and with concern about statements made and actions taken by these Members, I must reject the recommendations of Representatives Banks and Jordan to the Select Committee.

My statement on Speaker Pelosi's authoritarian decision regarding the January 6th commission: pic.twitter.com/DJ2DdXmeJQ