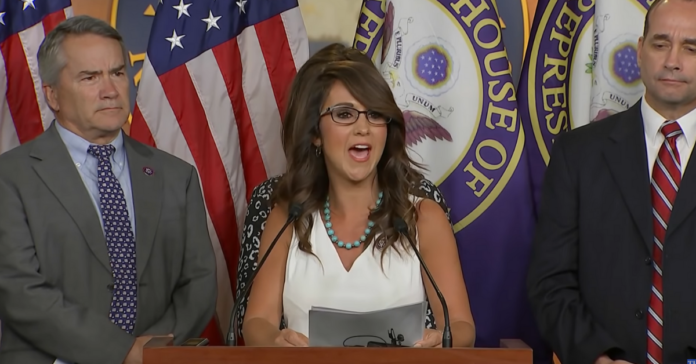 Representative Lauren Boebert and 23 of her colleagues introduced a bill to censure President Joe Biden and hold him accountable for his ‘dereliction of duty at our southern border.’

Rep Boebert said:  “My censure bill holds President Biden accountable for his actions—or lack thereof—at the border. Biden has refused to enforce the laws securing our border, he has refused to visit our border, his border czar Kamala has refused to visit the border, and his Secretary of Homeland Security is lying to the American people by saying that our border is closed. Not only has Biden done nothing to secure the border, he has actively made it worse by implementing policies that incentivize illegal immigration like amnesty, catch and release, and abolishing the remain in Mexico policy. The result of Biden’s mismanagement is staggering, and the numbers speak for themselves.”

Congressman Andy Biggs said: “The Biden Administration is a complete disaster. President Biden and Vice President Harris have sent an unequivocal message that they prefer illegal immigrants over Americans. Their radical agenda has erased our southern border. Americans suffer from the Biden policy which has encouraged more than one million illegal border crossings this year which has produced increased human, sex, and drug trafficking. The American people condemn the Biden Administration’s dereliction of duty.”

Congressman Barry Moore stated: “Ensuring the integrity of our borders is one of the most fundamental duties of a president, yet President Biden has destroyed four years of progress at the border to satisfy far-left activists and cheap labor-loving globalists. His reckless determination to reverse every Trump administration policy regardless of the outcome has put every American family and our economy at risk. We must hold President Biden to account for putting politics over the people he has sworn an oath to protect.”

Congressman H. Morgan Griffith said: “The heightened crisis at the southern border is almost entirely one of President Biden’s own doing. For purely ideological reasons, his Administration ended policies that were working to secure the border and protect the American people. When I went to the border, I saw unused materials that had already been contracted for lying by open gates and parts of the unfinished wall, the result of President Biden’s illogical and wasteful decision to immediately stop all construction on the wall. The surge of illegal immigrants and contraband into the country that followed was entirely avoidable and reflects poorly on the Biden Administration’s ability to fulfill its constitutional duties.”

Congressman Bob Good stated: “The absence of law and order is the breeding ground for criminal activity. Within the first four months of the Biden Administration, arrests for murder are already up an astonishing 1,133 percent at the southern border. President Biden’s reckless approach to our southern border is manufacturing a humanitarian crisis. President Biden has undermined his oath and taken Congress’ power into his own hands by granting blanket amnesty and failing to enforce the laws on the books. I am proud to join Congresswoman Boebert in calling for his censure.”

U.S. Customs and Border Protection (CBP) Former Acting Commissioner Mark Morgan stated: “President Biden is currently presiding over the greatest abandonment of immigration enforcement and border security this country has ever seen. Our border is in a historic crisis, solely due to his actions. Representative Lauren Boebert’s resolution would rightly censure President Biden for ignoring immigration laws and refusing to address the crisis, while also calling for him to terminate an open borders radical who leads the very agency I once served in. President Biden can stop the crisis today. It is time for him to put the American people and rule of law first, and restore order at our border.”

Federation for American Immigration Reform (FAIR) President Dan Stein stated: “President Biden wasted no time in quickly ending the successful immigration policies of his predecessor. These rash decisions have led to a historic border crisis with no end in sight. If current trends hold, CBP will encounter over 1.3 million illegal aliens in the current fiscal year – dwarfing past totals. His Secretary of Homeland Security – open borders amnesty architect Alejandro Mayorkas – has presided over this complete abdication of immigration enforcement. He is unfit for his role, and this resolution rightly calls for his removal and the nomination of someone who will prioritize the safety and security of the American people while faithfully enforcing laws enacted by Congress. Representative Lauren Boebert’s resolution is a well-timed, unified rebuke of President Biden’s abandonment of immigration enforcement that has triggered a crisis, and FAIR urges all members of Congress to support it.”

NumbersUSA Director of Government Relations Rosemary Jenks stated: “President Biden has made it abundantly clear that he refuses to take care that the immigration laws regarding the entry of aliens into the United States, as established by the Legislative Branch, are faithfully executed. While his legislative package to reward virtually every illegal alien, including criminals, in the United States with amnesty has languished in Congress, his administration has wasted no time in effectively dismantling ICE and CBP. The historic apprehension levels occurring at the border demonstrate that the world has received the message. Congress must finally step in and hold the President, along with Secretary Mayorkas, accountable for abdicating their Constitutional duties. NumbersUSA thanks Congresswoman Boebert for leading the charge.”

Eagle Forum President Colleen Holcomb stated: “Despite calls from both sides of the aisle to take action, the President and his administration continue to turn a blind eye to the massive amounts of immigrants flowing into our southern border.  The White House sits idly by while children are being violently harmed by cartels who are given huge paychecks to smuggle them into the United States. This has continued for far too long. Biden’s sweeping rollback of former President Trump’s immigration policies will wreak havoc on our nation’s economy, national security, and individual liberties. Representative Boebert’s resolution to censure Biden is a necessary action to highlight his failure to execute his duties as President.  Eagle Forum encourages all members of Congress to vote in favor of this piece of legislation.”