John McCain Takes Swipe At Trump From Beyond The Grave: ‘Assh*le, Idiot” 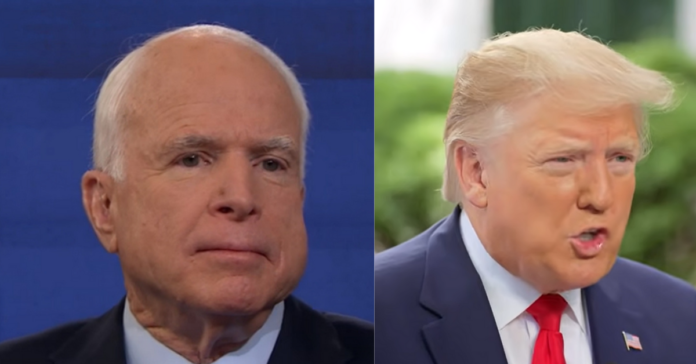 The late Sen. John McCain’s former chief of staff, Grant Woods, is trying to settle some old scores with Trump and is taking John McCain’s private words public in an effort to trash the former President. McCain and Trump famously battled over many issues with Trump steamrolling the Arizona Senator more often than not.

Many wondered why McCain didn’t hit back harder and according to Woods, it was because McCain thought Trump was an ‘assh*le and an idiot’ who wasn’t bothered by Trump because he didn’t respect the former President.

“It did not bother him a bit because he had such little respect — he had no respect for Donald Trump anyway,” Woods, a former GOP Arizona attorney general who became a Democrat in 2018, said.

“He called it as he saw it, and he thought Trump was an assh*le and he thought he was an idiot. And if he spent any time on it, it was in trying not to say that publicly as much as he thought it.” “He wasn’t, like, pissed for five seconds and then got over.”

Woods then contradicted himself and tried to make McCain a noble hero rather than a bitter politician saying that McCain later was annoyed by Trump’s attacks on his war record after talking with his POW friends.

“It’s one thing for John McCain, where he was, to go, ‘Yeah, who cares.’ But for these guys, their identity, their life was wrapped up in being a POW,” he said.

“So to then have someone nationally say, ‘Hey, you’re not a hero, that’s all bogus.’

“That wasn’t right to put an 80-year-old guy through that at that point in time, because they are heroes and I’d never heard anyone say differently.”