Kamala Harris Snaps At Fox News Reporter Peter Doocy: “It’s not my first trip, I’ve been to the border many times” 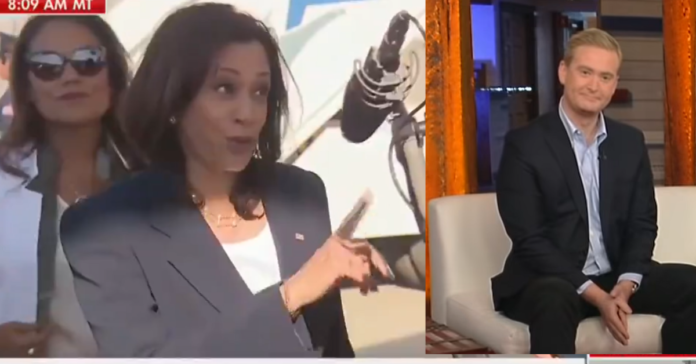 Vice President Kamala Harris finally made her way to the southern border for a long-awaited visit and she was immediately put on the defensive by Fox News reporter Peter Doocy. He asked her why it had taken so long to visit the border and she snapped telling him she has been to the border.

Harris who was appointed by President Biden in March to lead efforts at the border is in El Paso to visit a processing center and Border Patrol facility and receive an operational briefing. But as she arrived she was asked by Fox News’ Peter Doocy why right now was the time to make her first trip to the border.

“It’s not my first trip, I’ve been to the border many times,” she snapped back at Doocy while wagging her finger at him.

“And being in Guatemala, and being in Mexico talking with Mexico as a partner frankly on the issue, was about addressing the causes and coming to the border at the advice and invitation of Rep. Veronica Escobar is about looking at the effects of what we have seen happening in Central America,” she said.

The visit to El Paso comes amid a smattering of criticism that’s followed Harris since being tasked by President Joe Biden with leading diplomatic efforts in the Northern Triangle to address immigration.

Harris endured a rocky first foreign trip — her two-day swing through Mexico and Guatelmala — with sources telling CNN at the time that the trip left some officials perplexed about her bumpy answers to questions about whether she will go to the border.

But when pressed on the fact that she still had not visited the border, Harris responded, “… and I haven’t been to Europe. And I mean, I don’t — I don’t understand the point that you’re making,” Harris said with a laugh, adding, “I’m not discounting the importance of the border.”

That answer only intensified GOP criticism of her absence at the border.

Asked on Friday why now was the right time to come to the border, Harris said it was important she visit Guatemala and Mexico before visiting the border to build off of those meetings addressing the root causes of migration.

“Being in Guatemala, being in Mexico, and talking with Mexico as a partner, frankly on the issue, was about addressing the causes. And then coming to the border at the advice and actually the invitation of the congresswoman, is about looking at the effects of what we have seen happening in Central America, and so I’m glad to be here. This was always the plan to come here,” she said.

When asked if the border trip was essentially the administration bowing down to pressure from Republicans, Harris’ chief spokesperson, Symone Sanders, told reporters on a call Thursday evening that “this administration does not take their cues from Republican criticism, nor from the former President of the United States of America.”