Kamala Harris Trashes Media For Not Covering Her Depth and Thought: “Part of my frustration is the way that this system rewards sound bites” 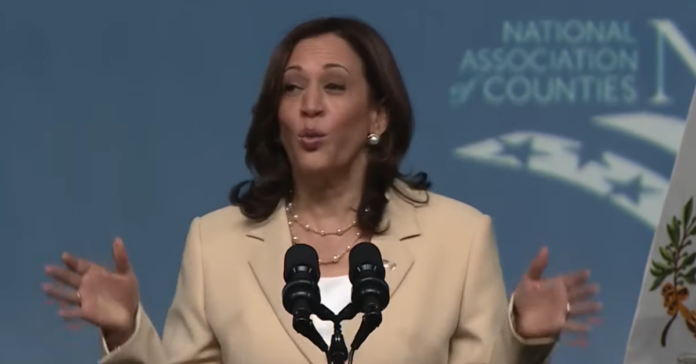 Vice President Kamala Harris is desperately trying to repair her image before she helps sink the Dems in the 22 midterms or even considers running for higher office. According to a recent poll, Harris is the most unpopular Vice President we have had in years if not ever.

So what is her strategy to do the impossible? Blame the media seems to be the last card she has to play. In a recent profile in The Atlantic, allies of Harris tried to blame sexism and racism.

“As a woman of color myself, and having worked a long time trying to elect the first woman president, there is just a different standard for a woman in politics,” Patti Solis Doyle, who managed Hillary Clinton’s 2008 presidential campaign, said. “I don’t think that Vice President Harris has performed any less than any other recent vice president in modern history.”

Harris herself tried to blame the media saying she was frustrated with media outlets for featuring “soundbites” over substance when covering her.

“Part of my frustration is the way that this system rewards sound bites” as opposed to “depth and thought,” Harris said.

According to Axios, Harris’ allies are concerned: “A group of the Democratic Party’s most influential women met for dinner at a home in the nation’s capital last month to game out how to defend Vice President Kamala Harris and her chief of staff, Tina Flournoy, against a torrent of bad press.

“Harris had been hit with a series of damaging press accounts, with leaks from administration officials questioning her political judgment and describing rampant dysfunction in her office. The operatives spent the dinner discussing how to fight back against negative perceptions, and how to help Harris boost her national media footing.”

She really did seem fed up with the media portrayal of her—particularly when it comes to those clips that drive headlines. But Harris also has a keen appreciation for the political power of the sound bite.

When she challenged Biden over busing at the first debate, she spoke of a California schoolgirl who was part of a newly integrated class. “And that little girl was me,” she said. Soon afterward, her campaign started selling $29.99 T-shirts emblazoned with the phrase.

Much of her value to Biden comes from interactions the public can’t see. She spends hours a day in meetings with the president, privately giving advice and offering a perspective rooted in a life experience very different from his. A former prosecutor, Harris will press officials on what they mean in hopes of satisfying Biden’s questions.

During the recent presidential transition, Neel, the former Gore aide, sent Harris a memo that warned of how easily a vice presidency can go sideways. He spelled out how the vice president needs unambiguous guidance about what, exactly, the president expects.

“I mentioned things like making damn sure your staff doesn’t get sucked into a gossip game about the president’s team,” Neel told me. “You’ve got to make sure your staff is discreet. Discretion is everything.”

So far, Team Harris hasn’t always been discreet. A Politico article in June described a “tense and dour” atmosphere in her office. One source told the outlet, “People are thrown under the bus from the very top, there are short fuses and it’s an abusive environment”—the sort of anonymous quote that any well-run White House detests. Harris is working toward improvements.

She consults a “kitchen cabinet” of people who offer her a perspective from outside the vice-presidential bubble: Minyon Moore, who oversaw her transition; Donna Brazile, who managed Gore’s 2000 campaign; and Karen Finney, a former spokesperson for Hillary Clinton’s 2016 presidential campaign.

She may soon hire some additional Washington veterans to bolster her staff.

In April, she spent more than an hour on the phone with the presidential historian Douglas Brinkley.

They talked about successful vice-presidential models that Harris might emulate. One concern she raised was the perception that “she’s not following the lead of Joe Biden” and that the news media might “find a way to wedge them apart,” Brinkley told me. “That’s what she’s guarding against. It’s a very delicate balance.”