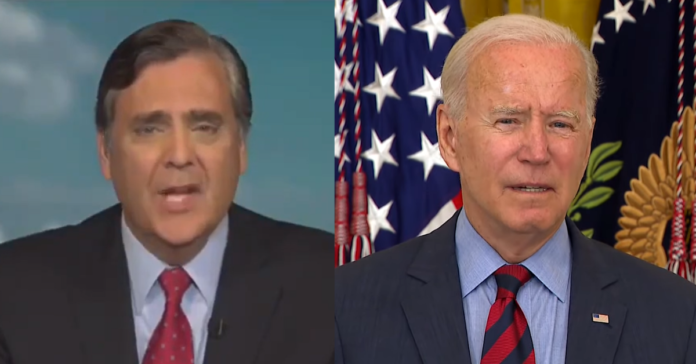 Turley said: “Biden admitted that “the bulk” of the constitutional experts consulted said that extending the moratorium would be unconstitutional. Yet, he indicated that he would still like to pursue it due to a couple of scholars encouraging him.

“What was astonishing is that Biden acknowledged that it is still likely unconstitutional but that they could tie it up in courts to get the money out in the interim. That line would be at the start of filings in federal court to impose an injunction on the program. “The President expressly acknowledged that they would seek a likely unconstitutional program hoping to get money out the door before the court killed the program.

“Given the ideological makeup of law school faculties, it is chilling that most of the preferred advisers to the Biden Administration admitted that this would be likely unconstitutional. It is equally unsurprising that there are a couple dismissing such constitutional concerns.

“President Biden took an oath to uphold the Constitution, not to violate it when he can use the delay in any final order to get the money out the door. In so doing, he is admitting that he would be spending federal money without constitutional authority.

“Like many, I was mystified by the Supreme Court decision not to strike down the moratorium.  The 5-4 decision in Alabama Association of Realtors v. HHS turned on the fact that it was about to expire on July 31st. Chief Justice John Roberts and Justice Brett Kavanaugh voted to preserve it but Kavanaugh made clear in his opinion that he would vote against any extension as unconstitutional.

“It was a decision decoupled from the merits. The unconstitutionality of the law was treated as simply inconvenient or irrelevant given the expiration.

“In his press conference, President Biden acknowledged that most of the experts consulted by the White House said that an extension would be unconstitutional. However, he noted that he found a few who dismissed or rejected such views: ““The bulk of the constitutional scholarship says that it’s not likely to pass constitutional muster … But there are several key scholars who think that it may and it’s worth the effort.”

“Frankly, given the overwhelmingly liberal makeup of law faculties, it is astonishing that most still told the President that an extension would be unconstitutional. Moreover, it is not difficult to find experts who are cavalier about the Constitution and willing to sign off on any effort to achieve desire political or social results.

“What is interesting is that Biden did not appear to accept their view but still thought violating the Constitution would be beneficial in this circumstance:

“There are a few scholars who say it will and others who say it’s not likely to, but at a minimum by the time it gets litigated it will probably give some additional time while we’re getting that $45 billion dollars out to people who are in fact behind on the rent and don’t have the money.”

“The President said the quiet part out loud and admitted that they would use litigation as a delaying tactic to spend money without constitutional authority. That line will now likely be repeated at the top of any motion challenging the extension and seeking a temporary injunction.

“President Biden’s position not only dismisses constitutional protections but disregards his own presidential obligations.

“It was just six months ago that President Biden swore to the following words:

“Chief Justice Roberts did not include an option for unconstitutional acts in the name of a good cause or when convenient. Biden agreed to uphold the Constitution to the best of his abilities.

“The Supreme Court has made clear that the extension would be unconstitutional as was the original moratorium. Biden asked the CDC to use the very same authority in extending the moratorium to give him a pretense for the spending of federal money.  That does not seem to bother many legal experts. After all, this unconstitutional act would be done for a good cause. Yet, imagine if a Republican president announced that he was told that an order on drilling or subsidizing a religious organization was unconstitutional but would use litigation to get the money out before a court could intervene. The hue and cry in the media and from law schools would be deafening.

“Biden came to office declaring a return to the “rule of law” but has actually racked up an impressive array of court losses.  Now he is treating a presumptively unconstitutional act as a purely tactical consideration to allow the spending of federal funds. That is not exactly what he pledged before he declared “so help me God” on January 20th,” Turley wrote.