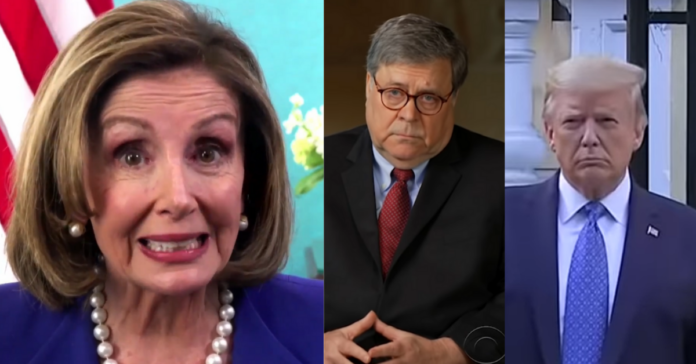 Nancy Pelosi and Adam Schiff are furious at Trump and Bill Barr and are calling for an investigation after news broke that DOJ surveilled two Dem congressmen – Adam Schiff and Eric Swalwell – as part of a leak investigation.

Pelosi said: “Recently, it has become public that the Trump Administration sought account metadata of House Intelligence Committee Members and staff and their families. The news about the politicization of the Trump Administration Justice Department is harrowing.  These actions appear to be yet another egregious assault on our democracy waged by the former president. I support Intelligence Committee Chairman Adam Schiff’s call for an investigation into this situation and other acts of the weaponization of law enforcement by the former president. Transparency is essential.”

The New York Times reported: “As the Justice Department investigated who was behind leaks of classified information early in the Trump administration, it took a highly unusual step: Prosecutors subpoenaed Apple for data from the accounts of at least two Democrats on the House Intelligence Committee, aides and family members. One was a minor. All told, the records of at least a dozen people tied to the committee were seized in 2017 and early 2018, including those of Representative Adam B. Schiff of California, then the panel’s top Democrat and now its chairman, according to committee officials and two other people briefed on the inquiry.

“Prosecutors, under the beleaguered attorney general, Jeff Sessions, were hunting for the sources behind news media reports about contacts between Trump associates and Russia. Ultimately, the data and other evidence did not tie the committee to the leaks, and investigators debated whether they had hit a dead end and some even discussed closing the inquiry. But William P. Barr revived languishing leak investigations after he became attorney general a year later. He moved a trusted prosecutor from New Jersey with little relevant experience to the main Justice Department to work on the Schiff-related case and about a half-dozen others, according to three people with knowledge of his work who did not want to be identified discussing federal investigations,” the Times wrote.

“President Trump repeatedly and flagrantly demanded that the Department of Justice carry out his political will, and tried to use the Department as a cudgel against his political opponents and members of the media. It is increasingly apparent that those demands did not fall on deaf ears. The politicization of the Department and the attacks on the rule of law are among the most dangerous assaults on our democracy carried out by the former President.

“Though we were informed by the Department in May that this investigation is closed, I believe more answers are needed, which is why I believe the Inspector General should investigate this and other cases that suggest the weaponization of law enforcement by a corrupt president.”

Rep. Eric Swalwell said: “We have seen this through the Justice Department by Donald Trump, whether it was the reason he was impeached, for trying to go after Vice President Biden at the time, or just other efforts, you know, through the Mueller investigation.

“And I support Chairman Schiff’s call for an inspector general report into not only this conduct, but other conduct that was corrupt by Donald Trump and those who worked for him.”

Senate Finance Committee Chair Ron Wyden, D-Ore., said this was “a direct attack on the separation of powers and Congressional independence. There must be a full investigation of abuses under former Attorneys General Sessions and Barr, and anyone at DOJ who was complicit in these abuses of power cannot be trusted to continue serving in government."

Soon after Mr. Trump took office in 2017, press reports based on sensitive or classified intelligence threw the White House into chaos. They detailed conversations between the Russian ambassador to the United States at the time and Mr. Trump’s top aides, the president’s pressuring of the F.B.I. and other matters related to the Russia investigation.

The White House was adamant that the sources be found and prosecuted, and the Justice Department began a broad look at national security officials from the Obama administration, according to five people briefed on the inquiry.

While most officials were ruled out, investigators opened cases that focused on Mr. Comey and his deputy, Andrew G. McCabe, the people said. Prosecutors also began to scrutinize the House Intelligence Committee, including Mr. Schiff, as a potential source of the leaks. As the House’s chief intelligence oversight body, the committee has regular access to sensitive government secrets.

In 2017 and 2018, a grand jury subpoenaed Apple and another internet service provider for the records of the people associated with the Intelligence Committee. They learned about most of the subpoenas last month, when Apple informed them that their records had been shared but did not detail the extent of the request, committee officials said. A second service provider had notified one member of the committee’s staff about such a request last year.

It was not clear why family members or children were involved, but the investigators could have sought the accounts because they were linked or on the theory that parents were using their children’s phones or computers to hide contacts with journalists.

There do not appear to have been similar grand jury subpoenas for records of members or staff of the Senate Intelligence Committee, according to another official familiar with the matter. A spokesman for Republicans on the House Intelligence Committee did not respond to a question about whether they were issued subpoenas. The Justice Department has declined to tell Democrats on the committee whether any Republicans were investigated.

Apple turned over only metadata and account information, not photos, emails or other content, according to the person familiar with the inquiry.