Pelosi Has Lost Her Mind Has Complete Meltdown 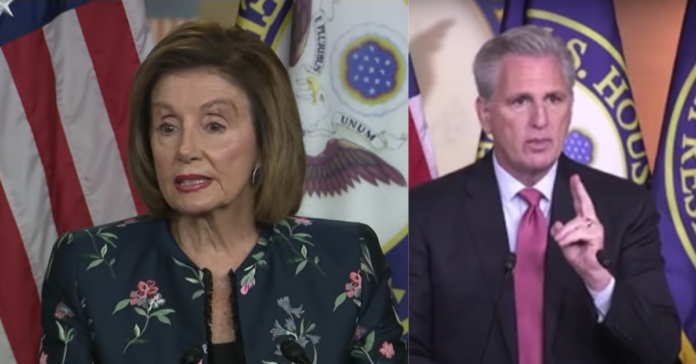 McCarthy confirmed a report yesterday that a phone call between Pelosi and the GOP Minority Leader turned ugly with voices raised and both sides reading each other the riot act.

But Pelosi turned the dial up to 10 this morning when she made it personal and called McCarthy (Calif.), a “moron” for coming out against wearing masks in the House.

“Makes no mistake — the threat of bringing masks back is not a decision based on science, but a decision conjured up by liberal government officials who want to continue to live in a perpetual pandemic state,” McCarthy said Tuesday night.

Pelosi fired back Wednesday morning saying: “That’s the purview of the Capitol Physician, the mandate’s from him. I have nothing to say about that except we honor it,” Pelosi said to reporters at the Capitol.

When asked about McCarthy’s comments Pelosi snapped and got personal.

The Hill reported, “Brian Monahan, the Capitol physician, instituted a new mask mandate for the lower chamber late Tuesday night in response to a spike in infections from the delta variant of the coronavirus.”

“The rise in cases also prompted the Centers for Disease Control and Prevention (CDC) earlier Tuesday to push new recommendations for masking indoors, even among those who’ve been vaccinated.”

A reporter asked Pelosi yesterday for her reaction to Minority Leader Kevin McCarthy saying he didn’t watch the Jan 6 hearing.

“Anytime you mention his name, you’re not getting an answer from me. Don’t waste my time,” Pelosi said.

Who does Pelosi think she is? Now certain names can't even be spoken to hear and she can walk around degrading people because they don't bow when she walks by?

McCarthy simply asked why, the data didn't show that the masks are needed and this was her response?

Have you ever heard a Republican answer a question like that?

Pelosi has carried herself with the untouchable, I'm better than everyone attitude for far too long and I CAN"T WAIT until President Trump comes back waging war and knocks that b*tch right off her high horse!

We may have to make that day a new national holiday!!