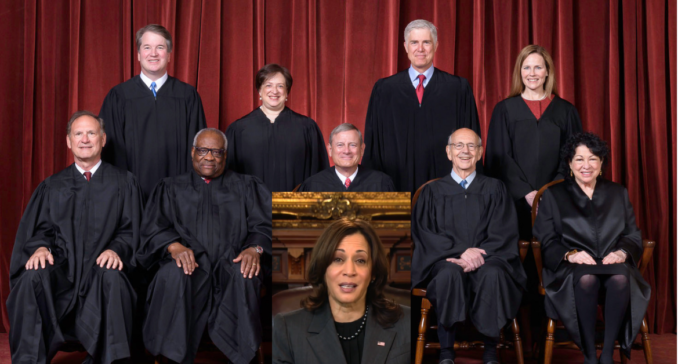 The story is a tragedy in three parts but is important because it shows us who Harris and Becerra – two people talked about as 2024 presidential candidates and who both served as California’s attorney general – are when the cameras are off. Now, some are focusing on the fact that Harris and Becerra’s interest in the disclosures may have been about politics as the state was sued by a conservative group funded by the Koch brothers, Americans for Prosperity Foundation.

It is possible but there is a scarier possibility – that Harris is just incompetent and let the power of the office go to her head.  Kaylee McGhee, a reporter for the Washington examiner, broke down the Supreme Court’s ruling and how it was a rebuke of Kamala Harris and Xavier Becerra.

Kaylee writes, “Writing for the majority, Chief Justice John Roberts noted that California didn’t even bother to enforce the donor disclosure requirement until 2010, which is when Harris became the state’s attorney general. At that time, Harris’s office demanded that all nonprofit groups seeking to raise money in the state report the names and addresses of their major donors nationwide. And although she claimed this information would be kept private, Roberts noted a lower court found that California “was unable to ensure the confidentiality of donors’ information.”

Kamala gets in and immediately pulls an intrusive big brother move for seemingly no reason other than she could and botches it so badly that sensitive financial and personal information leaks out to the public is as bad as it gets.

The court wrote, “In 2010, the State increased its enforcement of charities’ Schedule B disclosure obligations, and the Attorney General ultimately threatened the petitioners with suspension of their registrations and fines for noncompliance.”

Kaylee writes, “In other words, California not only demanded that nonprofit groups hand over confidential, sensitive data, but it also then made that data available to the general public by opening up these disclosures to public record requests and failing to supervise the third-party vendors who accessed the registry.

And who was the one responsible for these mistakes? Harris’s office — and, later, Becerra’s.

Kaylee continues: “Roberts agreed with the lower court that California’s donor disclosure requirement had a “chilling” effect on potential donors, many of whom had good reason to remain anonymous. He pointed to evidence provided by the plaintiffs that several of their supporters had been “subjected to bomb threats, protests, stalking, and physical violence.”

“Despite this, Harris and Becerra continued to compile a wealth of information, including sensitive details such as an individual donor’s home address, and took to court any nonprofit organization that refused to comply with the mandate,” Kaylee wrote.

The U.S. Supreme Court (SCOTUS) on Thursday sided with the Americans For Prosperity Foundation (AFP) against Acting California Attorney General Matthew Rodriguez in favor of keeping non-profit donor records private, smacking down a measure pushed by Vice President Kamala Harris that conservatives feared could be used to target them.

“The government may regulate in the First Amendment area only with narrow specificity, and compelled disclosure regimes are no exception,” Chief Justice John Roberts wrote for the majority in a 6-3 decision. “When it comes to a person’s beliefs and associations, broad and sweeping state inquiries into these protected areas discourage citizens from exercising rights protected by the Constitution.”

The Court held that California’s disclosure requirement is invalid because it burdens donors’ First Amendment rights and is not narrowly tailored to an important government interest.