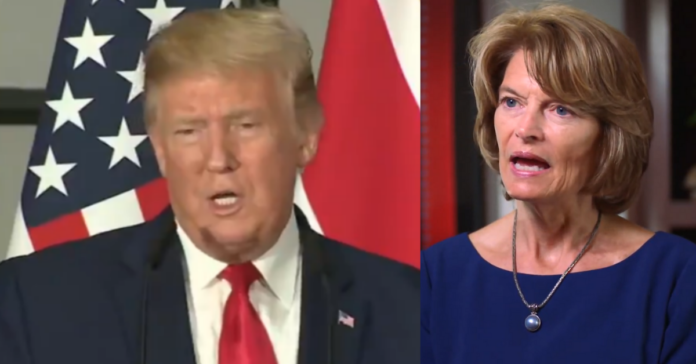 Former President Trump just doomed Sen. Lisa Murkowski (R-Alaska) in a Friday statement officially endorsing her top primary challenger. Trump promised to campaign against Lisa and do all he could to try to stop her from being re-elected.

In a statement by Trump’s leadership PAC Save America, Trump endorsed former Alaska Commissioner of Administration Kelly Tshibaka saying she is a strong supporter of his agenda.  “Lisa Murkowski is bad for Alaska, Trump’s statement started. He listed some reasons to vote against before saying “Murkowski has got to go.”

“Kelly Tshibaka is the candidate who can beat Murkowski — and she will. Kelly is a fighter who stands for Alaska values and America First,” Trump wrote. “She is MAGA all the way, pro-energy, strong on the Border, tough on Crime and totally supports our Military and our great Vets.

“Kelly is a powerful supporter of the Second Amendment and JOBS! I look forward to campaigning in Alaska for Kelly Tshibaka. She has my Complete and Total Endorsement!”

“I am running for the Senate to represent our conservative Alaska values,” Tshibaka said when she launched her campaign.

Nearly a dozen years after overcoming a Tea Party-inspired challenge from the right, Murkowski again is facing a Republican seeking to claim the mantle as the most aggressive version of today’s GOP — or in this case, the Trumpiest.

Republican Kelly Tshibaka, a former Alaska Department of Administration commissioner, has offered herself as a vessel for the supporters of the former President, who won the state twice, as she lambasts Murkowski for her penchant for deal-cutting and breaking with Trump.

The race is the first proxy battle between Trump, whose top political advisers have joined Tshibaka’s campaign, and Senate Minority Leader Mitch McConnell, who is backing the nearly 20-year incumbent. And it’s put Republican senators — including the National Republican Senatorial Committee — in an awkward position as they remain divided about the former President’s role in the party, and try to unify ahead of the 2022 midterms with control of Congress at stake.

In an interview, Tshibaka noted that the Alaska Republican Party has censured Murkowski for voting to convict the former President for inciting the insurrection at the Capitol, and claimed Alaskans were concerned about “the needless fight that she picked with Donald Trump.”