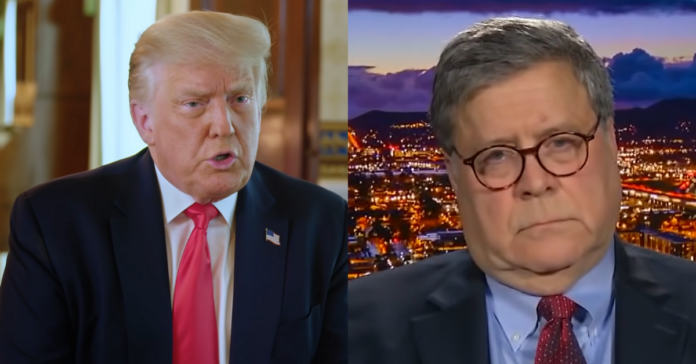 Former President Donald Trump fired back at his Attorney General Bill Barr after Barr did an interview where he called Trump’s election claims ‘all bullsh*t.’

Trump called Barr a RINO before saying, “He failed to understand the Horowitz report and let everyone down with respect to getting a timely investigation (where’s Durham?) on all of the corruption of the Obama-Biden Administration. It’s people in authority like Bill Barr that allow the crazed Radical Left to succeed.”

Trump took issue with Barr’s word choice before laying into him saying:“If he felt this way, why did Barr say he was “greatly honored” and “proud to have played a role in the many successes and unprecedented achievements you have delivered for the American people” in the final letter he wrote to me? He said, “Few could have weathered these attacks, much less forge ahead with a positive program for the country.

“Bill Barr was a disappointment in every sense of the word… Just like he did with the Mueller report and the cover up of Crooked Hillary and RUSSIA RUSSIA RUSSIA, they don’t want to investigate the real facts.

“Besides which, Barr, who was Attorney General (lawyer) shouldn’t be speaking about the President,” Trump said.

Barr said in an interview for Jon Karl’ss new book: “My attitude was: It was put-up or shut-up time. If there was evidence of fraud, I had no motive to suppress it. But my suspicion all the way along was that there was nothing there. It was all bullsh*t.”

According to Barr, this is how the meeting with Trump went down after Barr came out publicly and said there was no fraud in the election. From The Atlantic:

Trump was sitting at the table. Meadows was sitting next to him with his arms crossed; the White House adviser Eric Herschmann stood off to the side. The details of this meeting were described to me by several people present. One told me that Trump had “the eyes and mannerism of a madman.”

He went off on Barr.

“I think you’ve noticed I haven’t been talking to you much,” Trump said to him. “I’ve been leaving you alone.”

Barr later told others that the comment was reminiscent of a line in the movie Dr. Strangelove, in which the main character, Brigadier General Jack D. Ripper, says, “I do not avoid women, Mandrake, but I do deny them my essence.” Trump, Barr thought, was saying that he had been denying him his essence.

“How the fuck could you do this to me? Why did you say it?”

Barr thought that the president was trying to control himself, but he seemed angrier than he had ever seen him. His face was red. Barr’s AP interview was dominating every cable news channel except the one Trump was watching. The television in the room was tuned to the right-wing, pro-Trump network One America News, which was broadcasting a committee hearing of the Michigan legislature. The hearing featured disproven allegations of massive election fraud, including the testimony of a woman named Melissa Carone, who had worked at the counting location in Detroit and told the committee, “Everything that happened at the TCF Center was fraud. Every single thing.” The next day, Carone would testify again, next to Rudy Giuliani, during which time she slurred her words and appeared to be drunk. (Carone later denied that she had been drunk.)

“They saw the boxes going in!” Trump yelled, referring to the stories about boxes of illegal ballots being counted.

“You know, Mr. President, there are 662 precincts in Wayne County,” Barr said. Trump seemed taken aback that he knew the exact number. “It’s the only county with all the boxes going to a central place, and you actually did better there this time around than you did last time. You keep on saying that the Department of Justice is not looking at this stuff, and we are looking at it in a responsible way. But your people keep on shoveling this shit out.”

As Trump ranted about other examples of fraud, Meadows continued to sit silently with his arms crossed, his posture suggesting that he, too, was upset by what Barr had done.

“You know, you only have five weeks, Mr. President, after an election to make legal challenges,” Barr said. “This would have taken a crackerjack team with a really coherent and disciplined strategy. Instead, you have a clown show. No self-respecting lawyer is going anywhere near it. It’s just a joke. That’s why you are where you are.”

Interestingly, Trump didn’t argue when Barr told him that his “clown show” legal team had wasted time. In fact, he said, “You may be right about that.”