Trump Makes Example Out Of Kamala Over Border: “If I Weren’t Going There Next Week, She Never Would Have Gone” 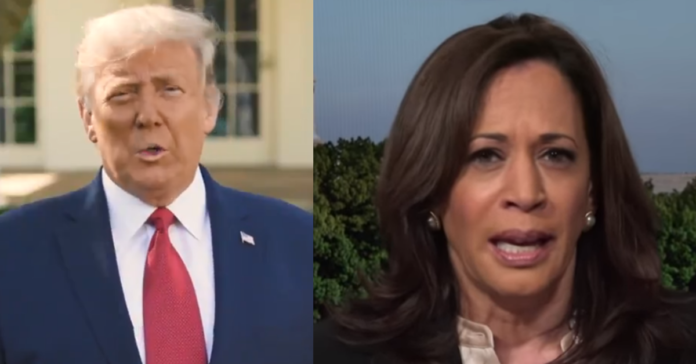 Vice President Kamala Harris caved and will finally go to the U.S.-Mexico border this week after Trump announced he was headed to the border. Kamala was picked by Biden as his border czar and many are questioning the curious timing of her visit.

But as soon as Trump announced he would head to the border to have a look at the damage and destruction the current administration has caused, Kamala quickly made a surprise trip to the border.

“After months of ignoring the crisis at the Southern Border, it is great that we got Kamala Harris to finally go and see the tremendous destruction and death that they’ve created, a direct result of Biden ending my very tough but fair border policies.

Harris’ border visit comes just days before former President Donald Trump is set to travel to the border, where he will be joined by Texas GOP Gov. Greg Abbott and a group of House Republicans. Shortly after the news of Harris’ visit began circulating, Trump released a statement claiming that if he and Abbott “weren’t going there next week, she would have never gone!”

Sen. Ted Cruz (R-Texas) was one of many Republican lawmakers to pile on Harris for announcing the trip, with Cruz echoing Trump’s assertion that the vice president was merely trying to get out in front of the former president’s upcoming visit.

“Suddenly President Trump is going to the border and they realized, ‘Oh crap, we got to do something,’” Cruz told Fox News.

But White House press secretary Jen Psaki argued that Harris’ trip was simply a part of her broader mandate to address the root causes of the increase in migration.

At a White House press briefing, Psaki also noted to reporters that she had “said here from this podium — and [Harris] has also said — that, when it was the right time, [Harris] may go to visit the border.”

The number of migrants arriving at the U.S. southern border has soared in the months since the Biden administration took office. In May, more than 180,000 migrants were apprehended at the border, according to monthly figures from Customs and Border Protection.

Of those, the majority — more than 112,000 — were almost immediately expelled. That’s because the Biden administration has continued to use Title 42, a public health order former Trump invoked in March 2020 at the start of the pandemic to kick out migrants without letting them seek asylum.

The U.S. has also seen a record number of unaccompanied children taken into custody under the Biden administration.

The number of child arrivals has steadily decreased in April and May but remains well above that 2019 record.